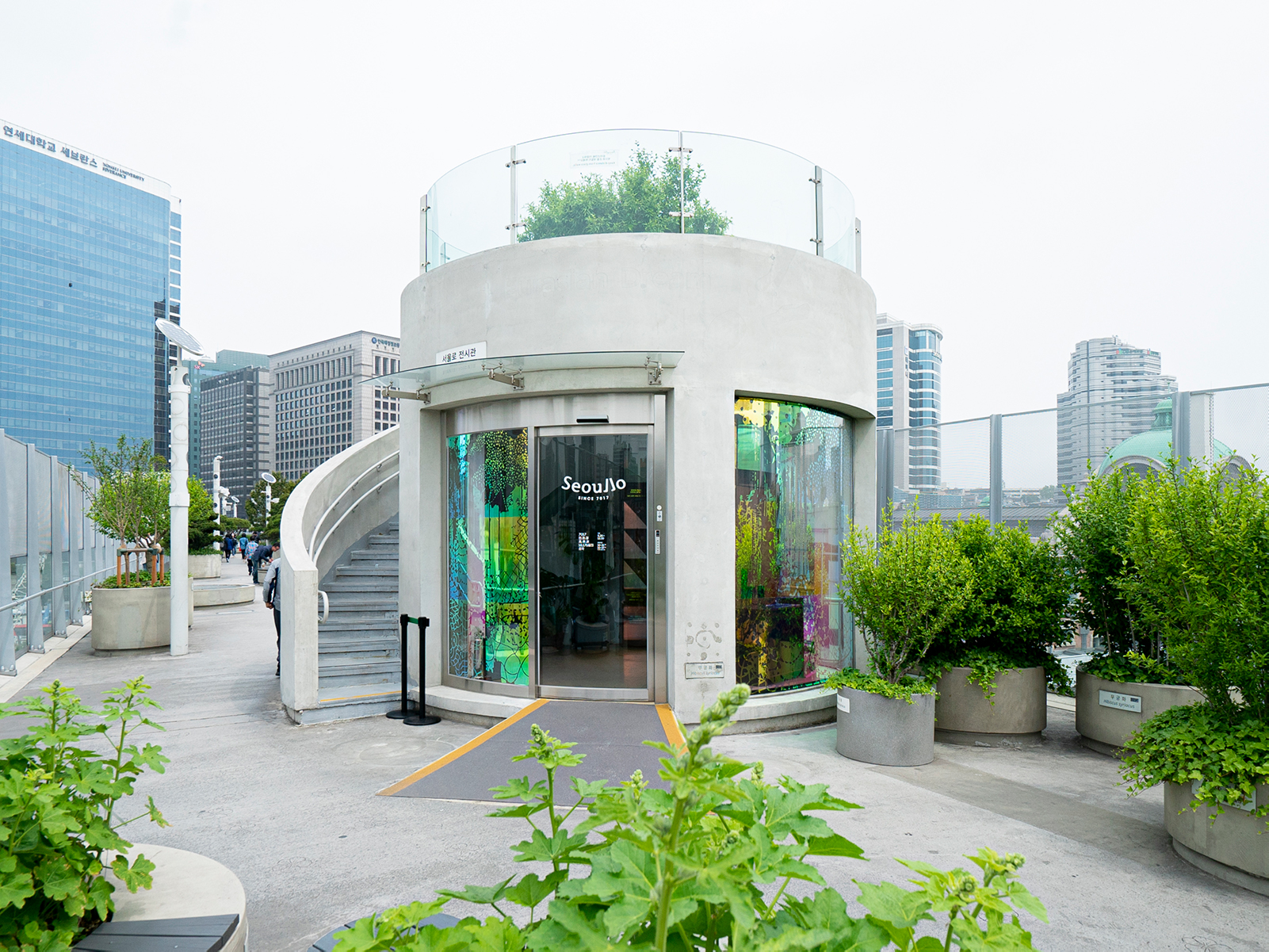 It has been three years since the Seoul Station overpass changed to Seoullo 7017. Rebel9’s “7017, Kaleidoscope, 萬 萬. 華 18,176 Days of Sculpture” is an exhibition of scenes from “Seoullo 7017” that reflect the modern and contemporary history of Seoul and the lives of citizens, just as the light reflected in the mirror in the kaleidoscope constantly creates beautiful shapes of various colors.

After numerous discussions and studies, the Seoul Station overpass was reborn on May 20, 2017. Seoullo 7017, which has returned to citizens as a symbol of garden culture and walking culture, while preserving the historical value and meaning of urban infrastructure, not demolition. It is a place where you can enjoy music flowing through the flowers in full bloom in spring, cool water play in summer, red maple parade in autumn, and warm Christmas events in winter. It is a landscape where you can meet and enjoy walking 7017 to Seoul in all four seasons.

Until the heavy concrete road turns into a green walkway and citizens’ footsteps and hands are added to it, the 18,176 days of Seoullo  7017 days are the past and present of Seoul and are still flowing in variety as the future we will portray. 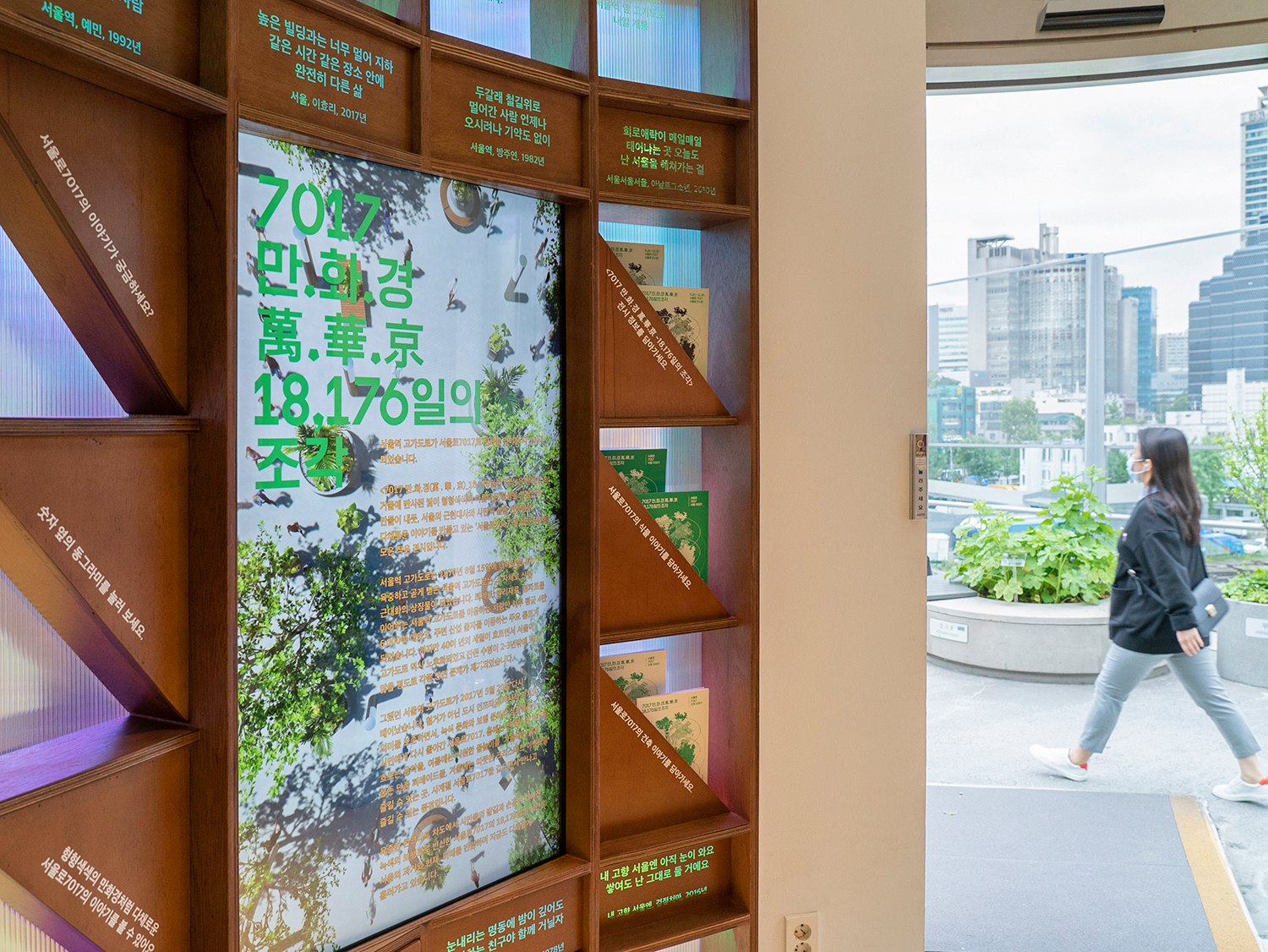 The graphic design of the exhibition is a patterned and reconstructed image of plants planted in Seoullo 7017. It has been applied in various print media such as posters, postcards and banners. Space design was planned by utilizing the characteristics of the circular form of space. The environment was constructed and designed with materials such as wood, glass, and plants. It had to compress more than 40 years and present the data in a small space. Therefore, they put letters on top of a furniture design with a bookcase as a motif to convey the core story. It will also secure a space where technical elements such as Aduino can be incorporated into the furniture. 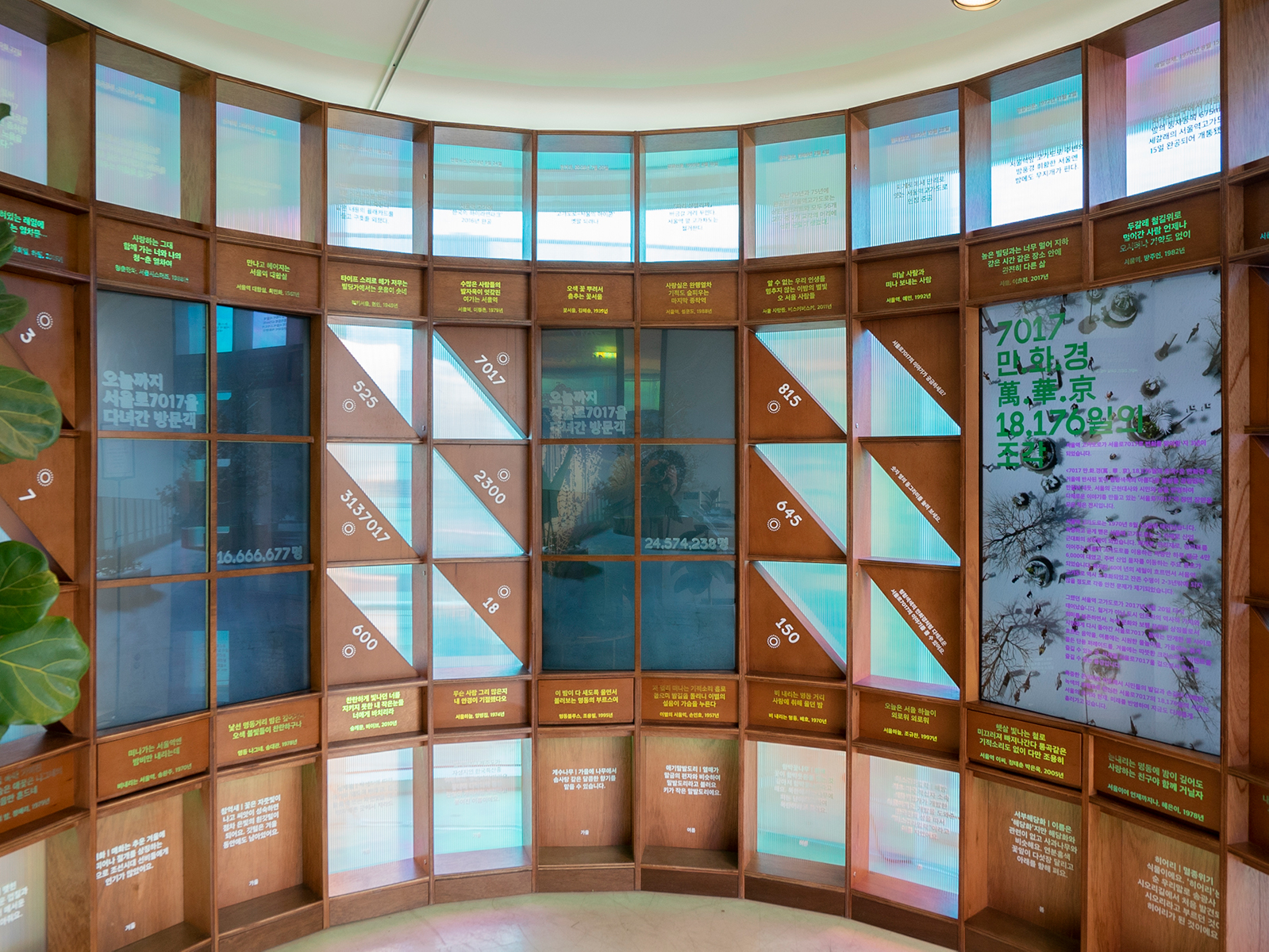 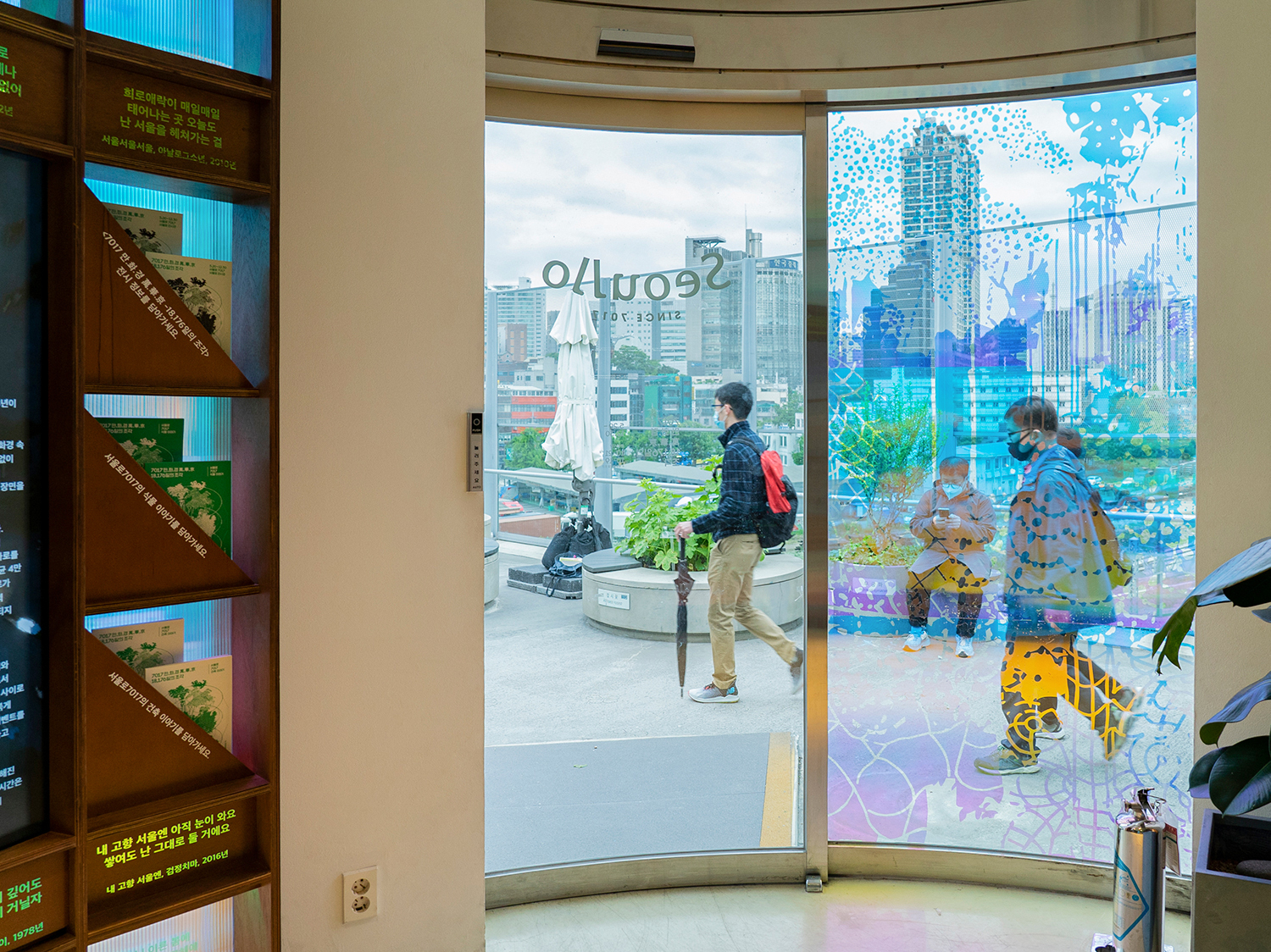 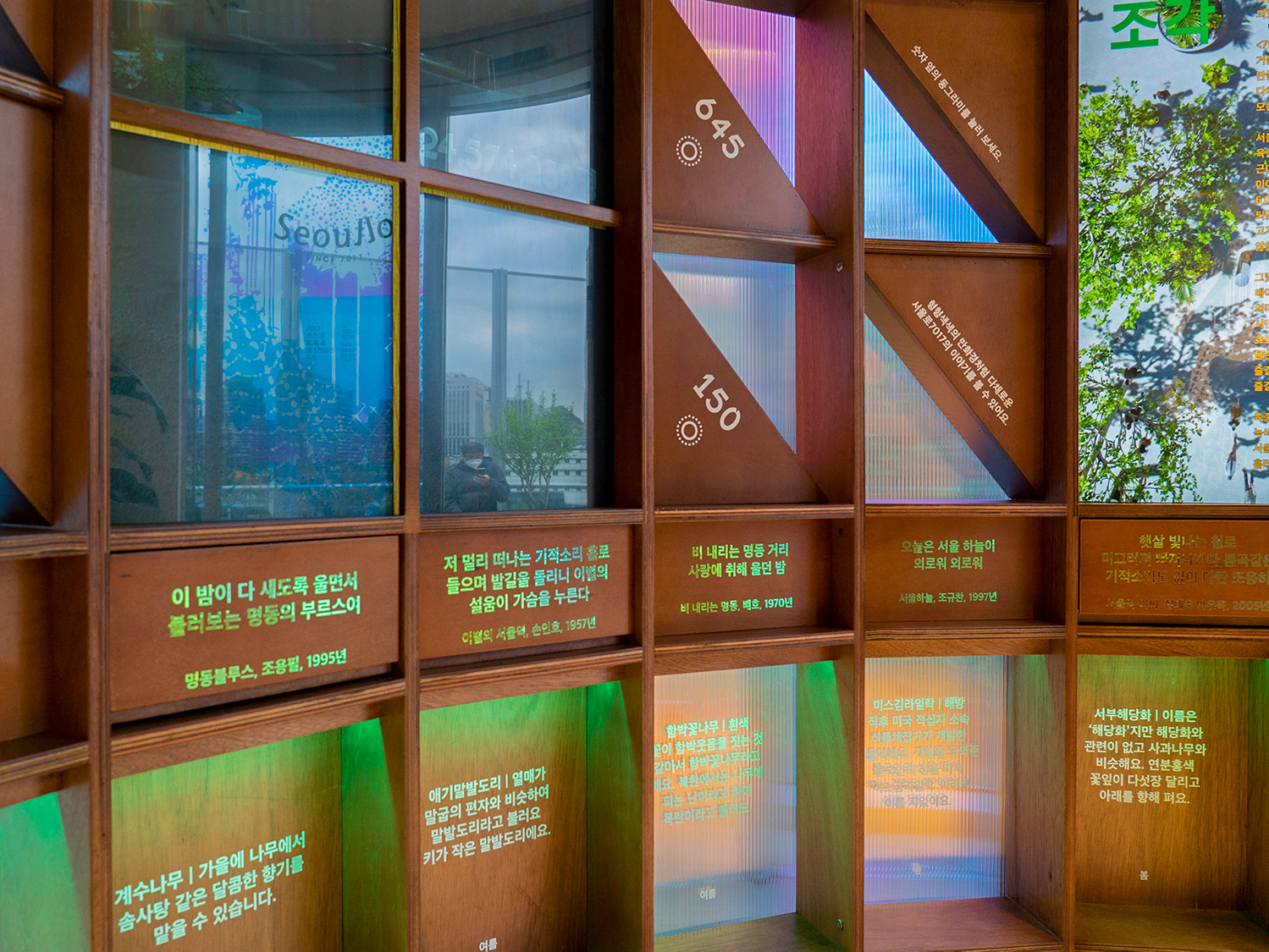 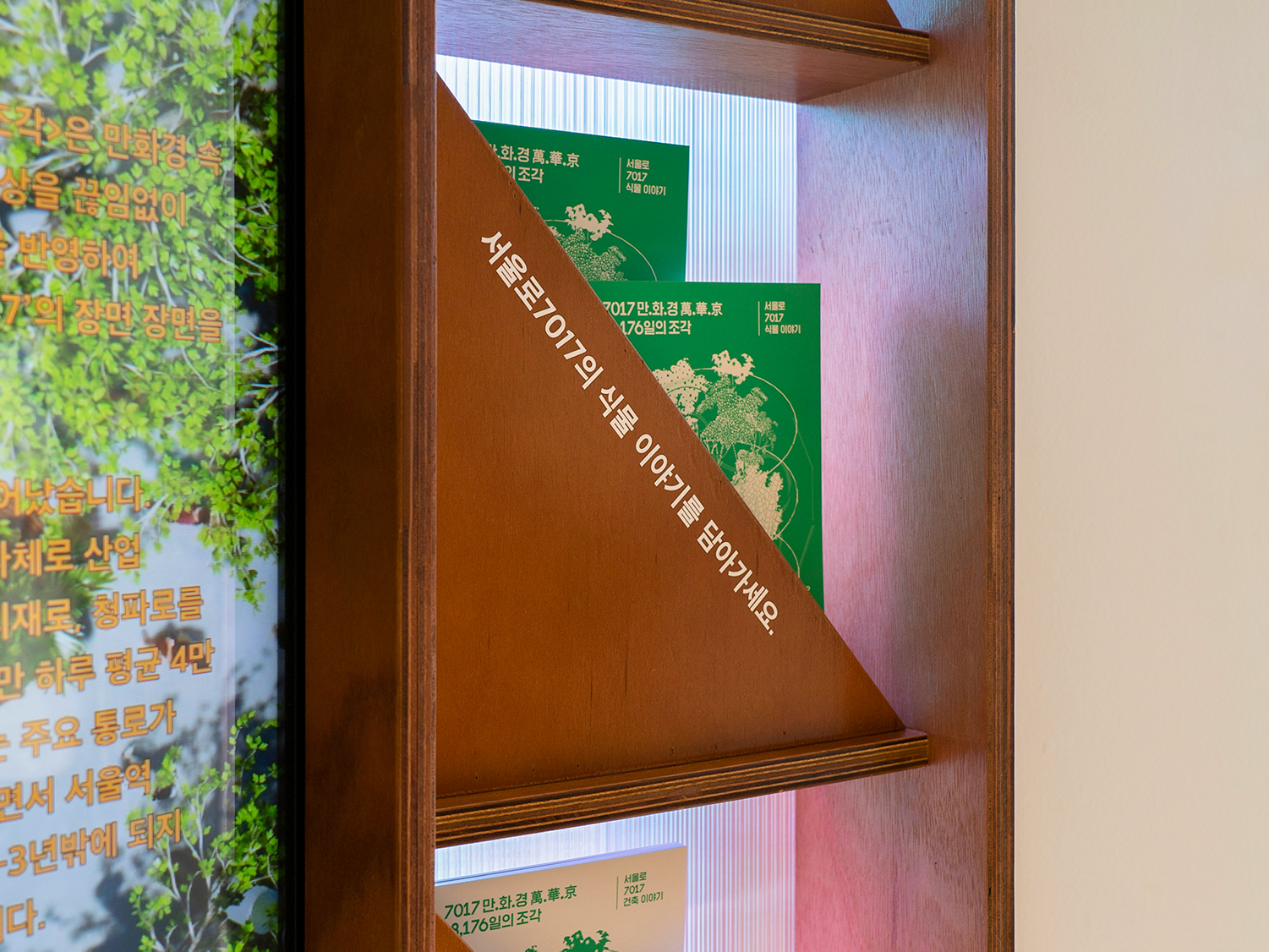 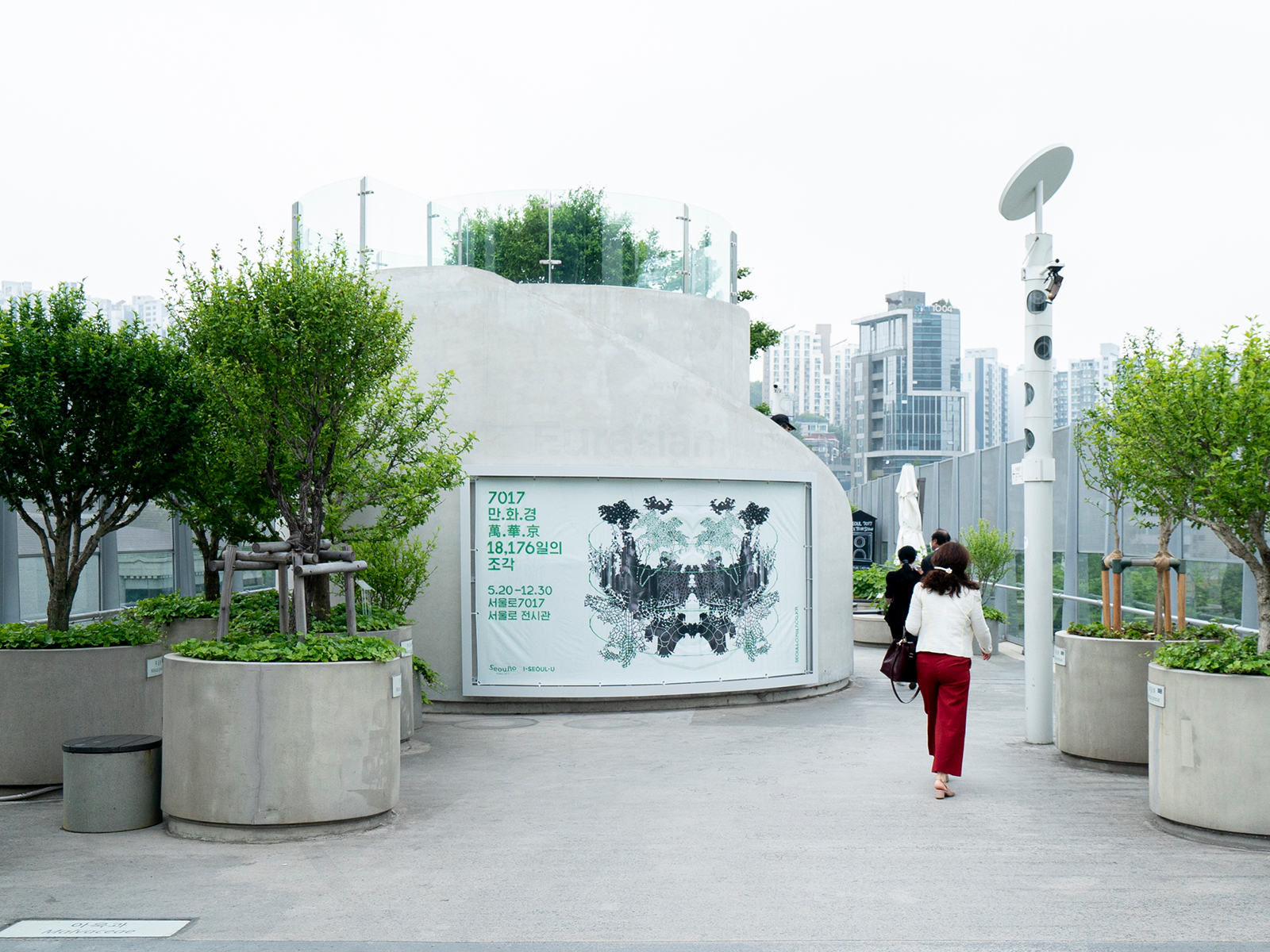 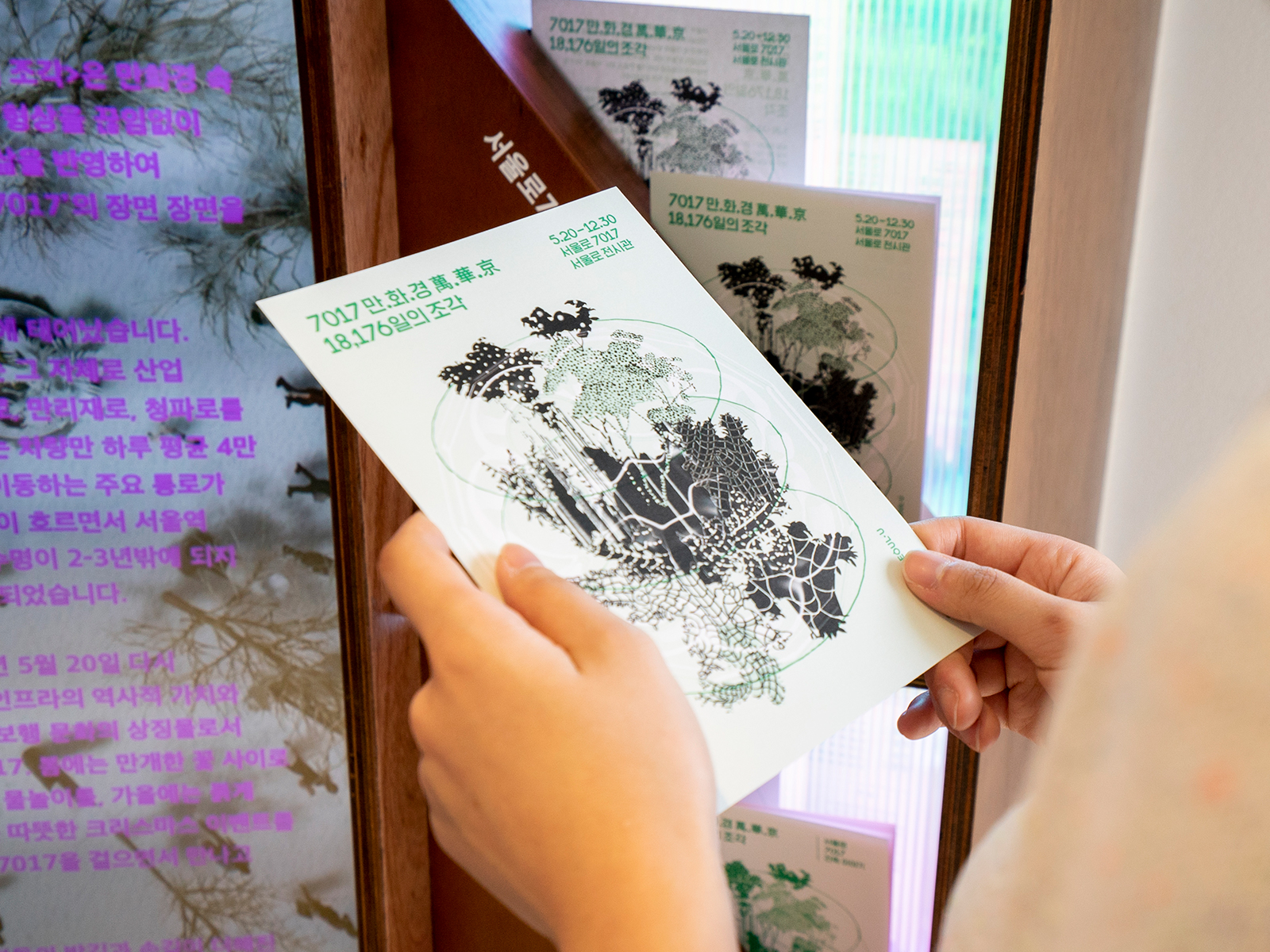 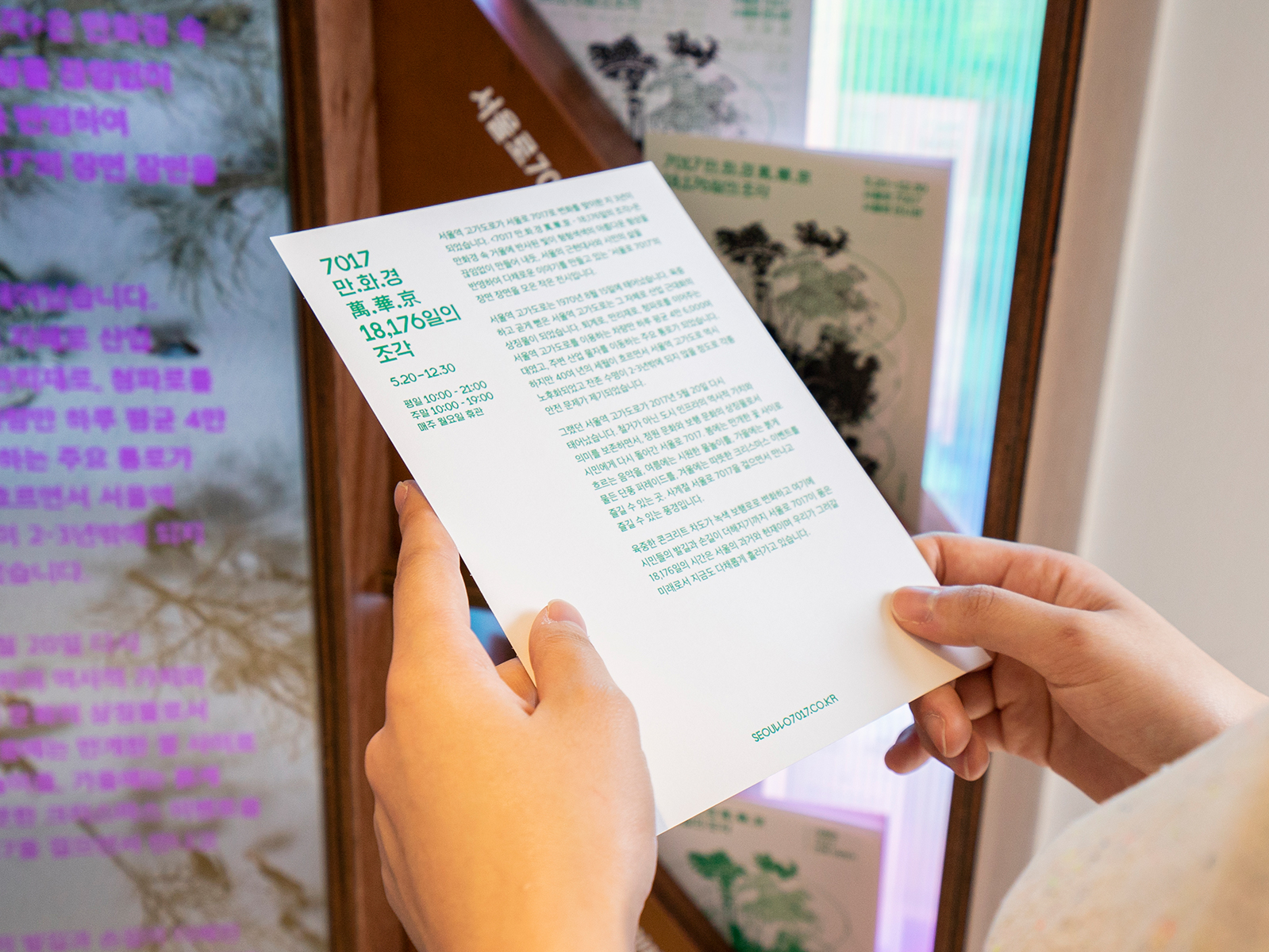 Every day, hundreds of visitors visit the exhibition hall in Seoullo 7017. Rebel9 has designed a screen that counts and adds up the number of visitors on the day and transmits them. Also, visitors experience viewing materials in a different from time to time. Arduino is installed behind the furniture to respond to visitors’ exploratory behavior. Visitors touch the number on the tree and talk about the number. 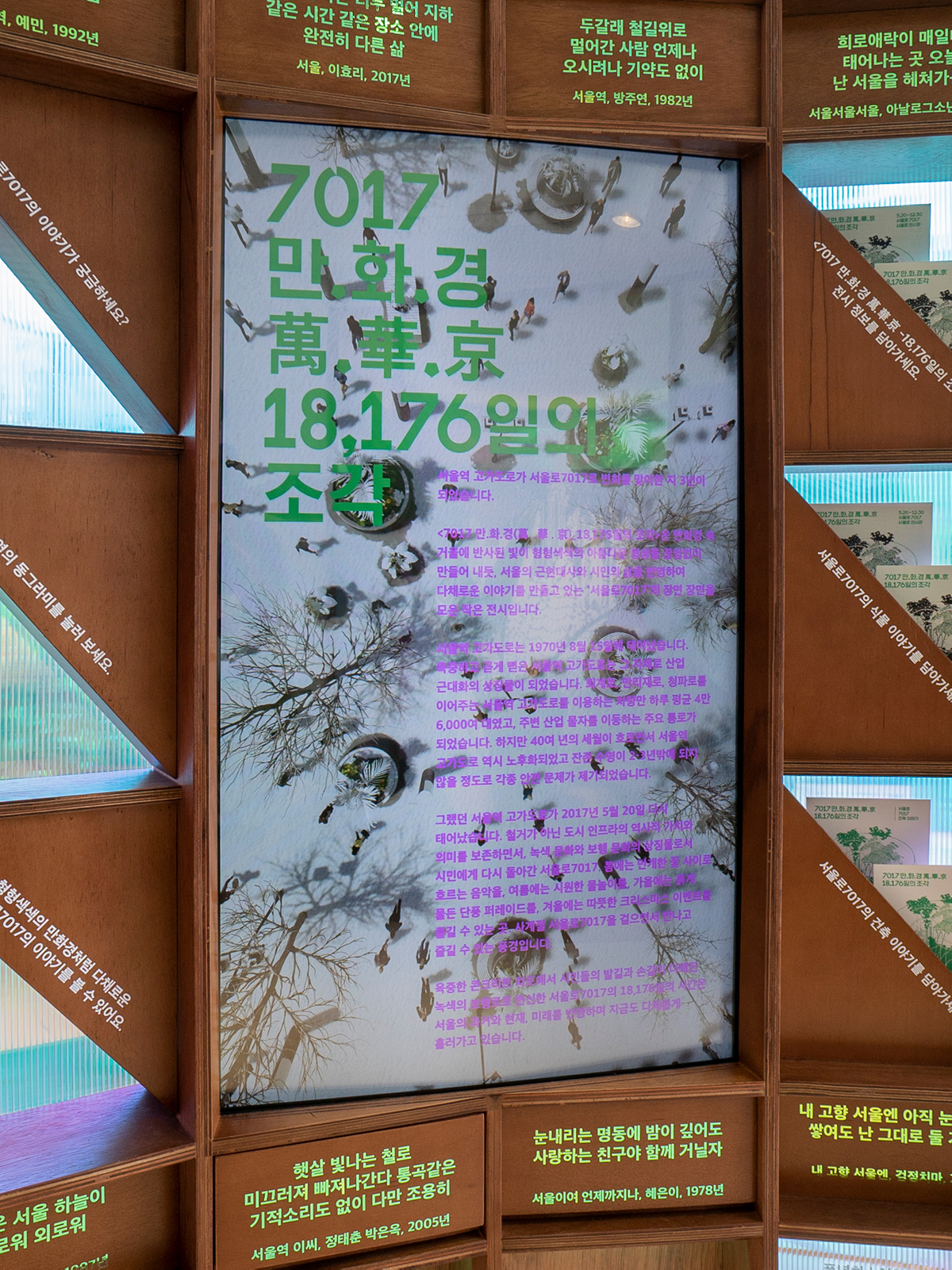 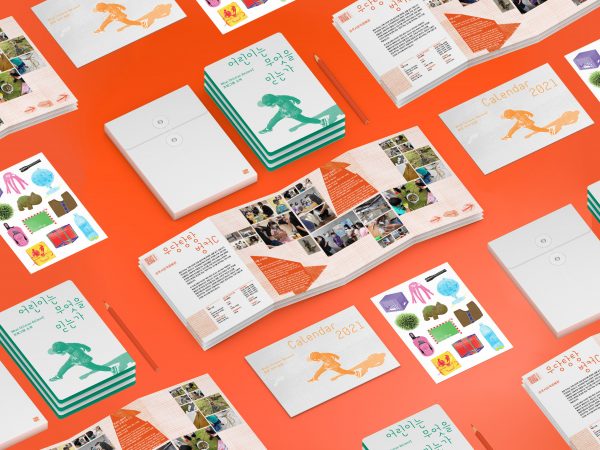 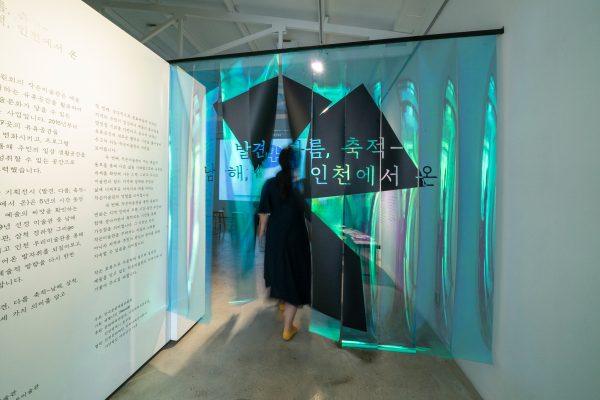